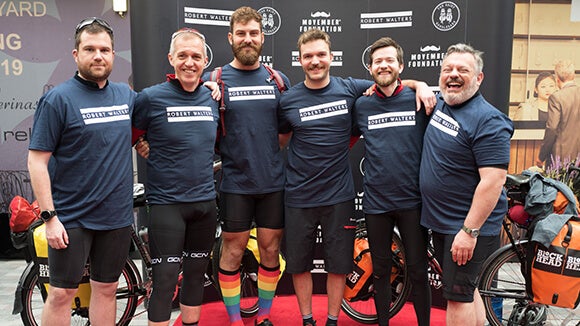 The scheme comes in response to Robert Walters Group research, which reveals that over three quarters of UK employees feel ‘uncomfortable’ talking about mental health in the workplace, citing anxiety of how they might be perceived by co-workers as a key hurdle.

“We are in the business of helping companies recruit and retain valued employees and so it only feels right to address this issue at home first.

“The onus is really on the employer to introduce initiatives that encourage wellbeing – this includes raising awareness of the role employees play in each other’s wellbeing and encouraging staff to connect with and check in on their fellow colleagues.”

This year, over 4,000 employees at the Robert Walters Group will be challenged to #BreakTheCycle and do something fun, active, meaningful and inclusive with colleagues – with the goal of improving wellbeing and checking in on peers.

Helping to set the benchmark will be the Hairy Handlebars and their 6,000 mile cycle from Robert Walters Group London HQ to their offices in Tokyo - all in aid of men’s health charity Movember.

The pair are being sponsored by the Robert Walters Group, a global specialist recruitment consultancy, and the launch of the campaign will be marked by the Hairy Handlebars’ departure – taking place at 11.30am – 12.45pm on Thursday 21 March in St Martin’s Courtyard, Covent Garden outside Robert Walters Group HQ.

“The issue of male mental health and wellbeing has gone under the radar for far too long, and we want to remove any last stigma attached to this. Working with Movember and sponsoring the Hairy Handlebars is only the first step in us championing positive mental health in the workplace. We look forward to seeing the Hairy Handlebars stop off at some of our offices around the globe and showcasing what it means to #BreakTheCycle.”

“Men’s health is in crisis. Globally, every minute a man dies by suicide. In the UK, 75% of suicides are men and in England and Wales, suicide is the leading cause of death among 15-49 year old men.

“It’s great to see global organisations such as the Robert Walters Group taking responsibility for their work practises and employee wellbeing, and we wish the Hairy Handlebars the best of luck on their challenge!”

The Robert Walters Group’s #BreakTheCycle challenge will have a 60* goal – be it 60 seconds, 60 minutes, 60 km, or 60 attempts – all in aid of representing the 60 men we lose each hour to suicide.

George Cullen, one of the Hairy Handlebars, said:

"We are so grateful to the Robert Walters Group for the support they are giving us as we take on this epic challenge. The company’s commitment to giving back to local communities and investing in their own employees, means they reflect the message we are trying to spread by cycling from London to Tokyo.

“Men's health, particularly mental health, is something that is not addressed enough and the #BreakTheCycle campaign is an amazing initiative aimed at bringing people together to help each other out in the workplace.

“We are honoured to be the primary vehicle through which to spread the campaign and can't wait to officially kick everything off when we depart on our expedition on March 21st at their London HQ in Covent Garden. We will be finishing at the Tokyo office in Japan and hope to welcome employees along with us as part of their own #BreakTheCycle challenge."